The marketing also included small “tobacco felts,” or blankets as they were originally called.  While still referred to as felts today, these look and feel more like silk, but they are actually made of flannel.  Almost all of these felts were issued between 1910-1915 and had themes such as flags, rugs, Native American patterns, college seals, college pennants, college and professional athletes, soldiers, and a few other themes. A few were inserted into packages of cigarettes and small cigars. More often they were wrapped outside a package, secured by a paper band. Most were premiums, exchanged for coupons found in various products.

This “felt” below is a circa 1910’s hockey tobacco felt for Oregon Agricultural College. This felt was likely issued as a premium by Fatima or possibly another of the leading tobacco companies during this time. It features the Oregon Agricultural College seal at center and the border shows crossed vintage hockey sticks and pucks. It measures 5 1/2 inches x 8 1/4 inches.  I’ve always been intrigued by the hockey theme for Oregon State (did they even have an ice rink on the campus back then???), as opposed to the more popular football or baseball played in the NW at the time, but this may have just been a standard border because I have seen a couple other identical college felts for different schools which also have hockey sticks but each school’s unique seal and colors.  These felts are known to be pretty rare (they were fragile 100 years ago!), although I have seen a few of this exact same one for Oregon State come up over the years. 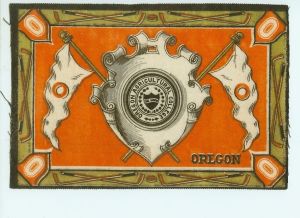