In earlier posts I have given some background on Oregon State’s first appearance (and only victory) in a Rose Bowl game, which took place on New Years Day in 1942.  It was this game when the boys from Corvallis defeated a favored Duke 20-16 in the only Rose Bowl game not played in California, due to concerns on the West Coast after the Japanese bombing of Pearl Harbor a few weeks earlier. Oregon State’s Don Durdan was named the “Rose Bowl Player Of The Game” when the award was created in 1953 and selections were made retroactively.

This is a game ball from that 1942 Rose Bowl game (Photo by Jon Gardiner).  It currently resides in the Duke Sports Hall of Fame and is shown in a great online article by Duke Magazine that was written in 2011, giving Duke’s perspective of this unique Rose Bowl game.  But if game balls were given back in 1942, I’m sure Don Durdan had one of these sitting on his shelf for many years! 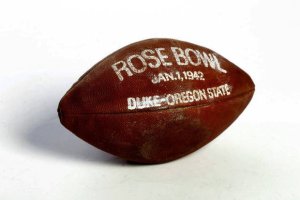