I have previously posted some items and info on 1942 Rose Bowl game between Oregon State and Duke, which is most famous for being the only Rose Bowl played outside of California.  Due to concerns over WWII, the game was played in Durham, NC, where Oregon State upset a heavily favored Duke team by a score of 20-16.

While some memorabilia from this game can be found, one of the more rare items is the trophy that players and coaches were awarded from that game.  All Oregon State coaches and players received the trophies and we know at least the Duke coaches received them as well, because there was a story about a man in NC finding one of these trophies in the trash back in 2014, which had belonged to one of the Duke Coaches!

The pictures below include the trophy that was found in the trash (and later auctioned off), as well as the trophy from Oregon State player Leeland “Lee” Gustafson, who is pictured below (bottom row – far right on the team picture).  The trophy stands about 20 inches tall and is a beautiful example of the way trophies looked back when they had true character and style! 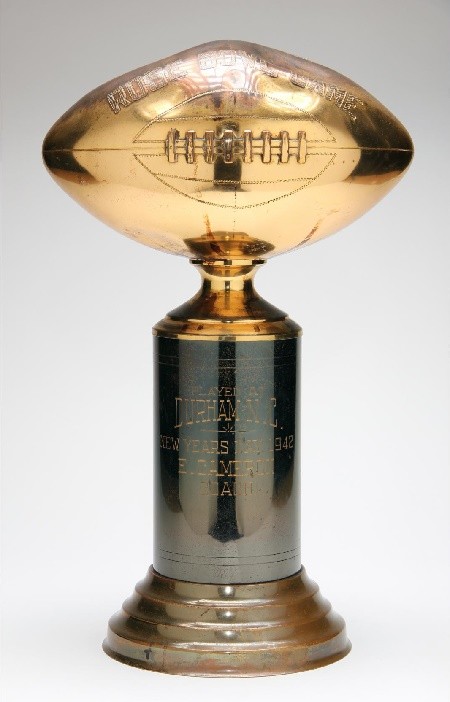 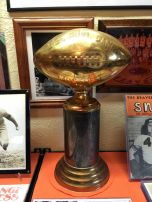 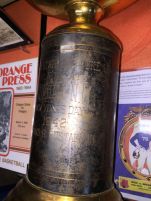 While I have been fortunate to come across and obtain many old Oregon State University pennants, there are still several from the school’s Oregon Agricultural College (OAC) days that I have only seen in pictures, old photographs, or even drawings.  The pennants in this specific post are not in my personal collection, but I’d obviously love to find!  They all range from roughly 1890-1927, before OAC became Oregon State College (OSC). Each is unique and I found them from number of sources, like the Benton County Historical Society, OSU’s Archives, old programs, or old online auctions.  Keep your eye out for others as I’d love to add more pennants (or even just pictures of them) to the collection and this site!

Dating to the early 1920’s, this is the oldest OSU (then OAC – Oregon Agricultural College) banner I have come across.  The calligraphy style font of the hand-stitched OAC letters is the best way to date it, as this style of letters started to appear around that time.  For being around 100 years old, this felt banner has amazingly vibrant colors and its large size (32 1/4 x 16) is unique.  Old OAC pennants are rare, but this is the first OAC banner I have come across, making it a neat piece of Oregon State’s history! 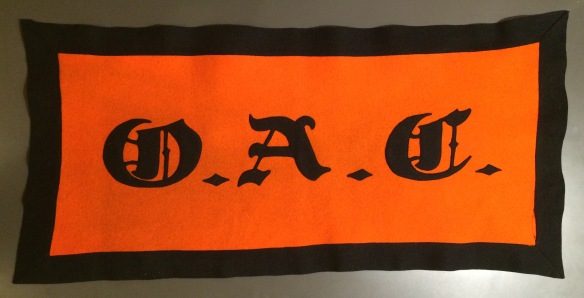 This full size black felt Oregon State University pennant dates to the leather helmet era of football back in the 1930’s-1940’s.  The picture and lettering were both screen printed on the pennant. Very few pennants from this era had pictures of players, making this one unique, and the style of uniform and helmet are what help approximate its age.

Oregon State was led by eventual Heisman Trophy winner Terry Baker when it faced a one loss Villanova Wildcat team in the 1962 Liberty Bowl, which was played on a frozen field in Philadelphia on December 15th.  Baker scored on a 99 yard quarterback keeper run to provide the only points of the game, with OSU winning 6-0, earning its first bowl victory since the 1942 Rose Bowl.  After starting 0-2, the Beavers capped the season with eight straight wins and Baker won the Heisman just weeks after his performance in the Liberty Bowl.  Here is a pinback, program, ticket stub, decal, and a picture of Terry Baker from the game! 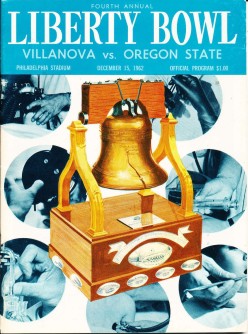 This slightly smaller than normal OAC (Oregon Agricultural College) pennant came from the same estate as the Class of 1914 OAC pennant that I posted about earlier, so I’m assuming it’s from roughly the same year.  For being 100+ years old, this particular pennant has the truest orange and black colors on the felt and hand-stitched letters that I have ever seen!  The styling of the OAC letters are also unique.  This is one of my favorite old Oregon State pennants that I’ve come across.

Oregon State must have been quite the scene back in 1914, when this large wool hand stitched pennant hung on the wall of a graduating senior at Oregon Agricultural College!

While I’m sure it was a memorable year for this particular senior, unfortunately the Beavers sports teams probably didn’t create too much excitement around campus!  The Beavers football team, under direction of coach E.J. Stewart, would have just finished up the 1913 season by going 3-2-3, including a 10-10 tie in the Civil War game.  The 1914 men’s basketball team, also coached by E.J. Stewart, went 10-8.  They played the Ducks six times during the season, winning four of those.  Lastly, the Beavers baseball team had a disappointing 7-9 season, including a 1-7 record in league play, which could be the reason Coach Wilkie Clark only lasted one season!

This pennant came from an estate along with this old OAC pennant.

School pennants have come in all shapes and sizes over the years, including mini-pennants that range from just a few inches to around 12 inches long.  The really small pennants were probably given out as promotional items by the school or maybe came with something bought at the store.  The slightly bigger ones were probably bought at OSU’s bookstore, or at other stores around town.

Below are a few examples of small pennants from Oregon State University.  These are all from 1961 or earlier, when OSU was still known as Oregon State College.  The top three pennants are the smallest, with the first black one only being only about 3 inches long! 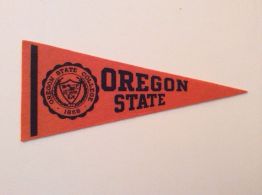 This black felt O.A.C. pennant, with hand stitched orange felt letters, dates from c. 1918, at a time when America and Oregon Agricultural College (then OAC – now OSU) were in the last year of our country’s first great war, World War I.

Helping date this pennant, it came with five small pinbacks from WWI affixed to it.  The pins include a “Third Liberty Loan” pin, a Salvation Army War Service Fund pin, and three small Red Cross pins.

These pins were probably collected by a student at OAC during the War (1914-1918), when Oregon State University was a thriving training grounds for countless men and women who would go on to serve our country in one capacity or another.

During 1917, OAC was the center of military life for the entire state of Oregon. 66 faculty left to aid in the war effort. The US War Service called an additional 105 staff members to active service in 1918, and nearly 2,000 students, alumni, and faculty members were enlisted. In addition, more than 2,000 men were in training at OAC in the Students’ Army Training Corps and other military and naval training units.  Sadly, 51 OAC students, faculty, and alumni lost their lives during the War.  Below are two pictures of campus during 1918.  The first shows OAC’s President Kerr addressing the Student Army Training Corps, and the second shows Army students doing radio training. For the early part of OSU’s history every physically fit male was required to take the first two years of ROTC instruction.

Today, OSU Army ROTC continues the tradition of “The West Point of the West,” the nickname earned during World War II when the OSU Corps produced more officers than any other non-military academy in the nation.

The “Third Liberty Loan” pin refers to part of the larger effort by the U.S. government to sell war bonds (also known as Liberty Bonds) during WWI, to defray the expense of war. They were primarily sold by the boy and girl scouts, and the Third Liberty Loan Act was enacted in April of 1918, giving the best evidence of the age of this pin and pennant.

The Salvation Army War Service Fund was a fund raising effort to help provide assistance to the troops during the war. And the Red Cross, which started the war as a small organization, by war’s end had nearly one-third of the U.S. population who were either Red Cross donors or serving as a volunteer. In all, 20 million adults and 11 million youth claimed membership in the American Red Cross during the war and more than 8 million adults were volunteer workers.

Undoubtedly, many of these organizations were found on the campus of OSU during this time, and this pennant and accompanying pins provide a unique snapshot into a student’s life during that time in the school’s history… nearly 100 years ago! 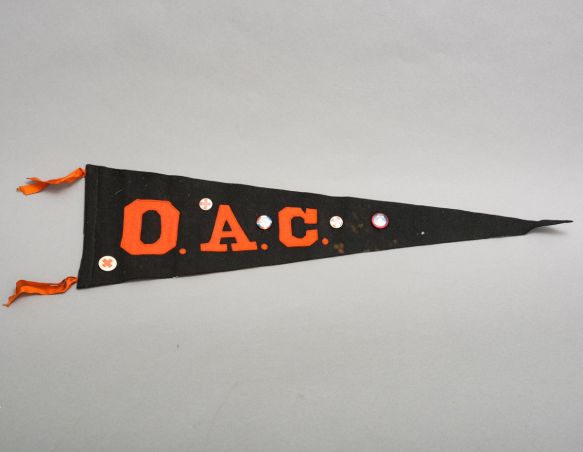 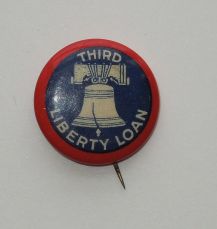 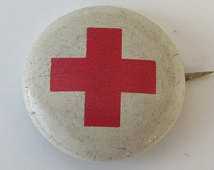 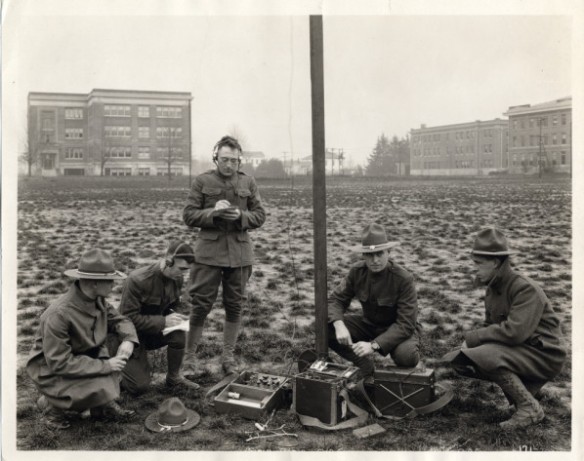 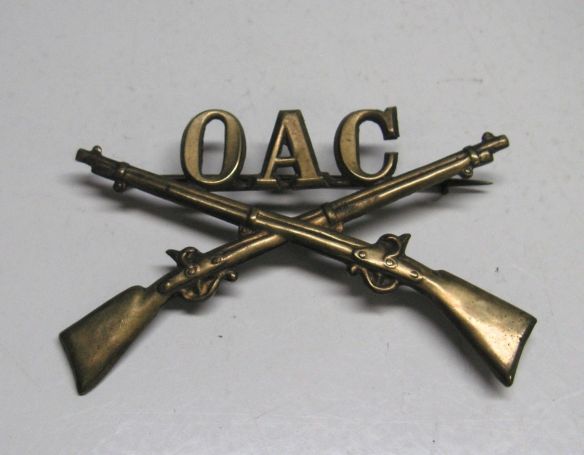 Despite standing a mere 5 foot 6 inches tall and 165 pounds, John “Johnny” Biancone was a highly decorated quarterback  and halfback for the Oregon State College Beavers from 1931-1934.  This trophy, I’m assuming, was given to Biancone his senior year by Oregon State to commemorate his playing days at OSC.

John graduated from Portland’s Benson High School in 1930, where he lettered three times in five different sports.  He was a member of the 1928  City Championship Team, captain of a soccer team that was undefeated all four years, and he was also a State Wrestling Champion in 1929.  He is a member of the Portland Interscholastic League (PIL) Hall of Fame.

While at Oregon State, John lettered three years in football and baseball (back then they could not play on Varsity as a Freshman so they couldn’t earn letters for that year).  On the gridiron, John played both halfback and quarterback under coaches Paul Schissler and then Lon Stiner.  It appears he switched between HB and QB during games, depending on what was working.  A 1932 news article from a rival team city said John was “a dashing, tricky open field runner.”  While he played football during 1933, it doesn’t appear he was on the field during the Beavers famous “Ironmen” game, where only 11 players played every minute on both offense and defense in a 0-0 tie against a two time National Champion USC team that suited up 80 men for the game.  While I haven’t done the research, I’m assuming Biancone was injured for that game.

After college John spent one year in 1936 playing quarterback in the NFL for the Brooklyn Dodgers, where records indicate he played in 5 games (they played far fewer games back then).  The following preseason he broke his leg and was released by the Dodgers, ending up with the Paterson (NJ) Panthers of the American Association (more of a minor league team) for a couple years.

Fast forward to 1942, and Biancone, like many men his age, found himself in the Army stationed at the Santa Ana Army Air Base in California.  At this base, Captain Biancone was the manager of the its football and baseball teams.  It seems he was the Athletic Director for the entire base, which at the time, had many former college and pro athletes in the army stationed there.  The large army bases would put together athletic teams to compete against other military bases, college teams, and even professional teams.  Biancone’s 1943 baseball team compiled an impressive record, including a winning streak of 20 straight games behind the stellar hitting of their star centerfielder who you may have heard of… Joe DiMaggio!

This neat trophy stands about 7 inches tall and the football player and plaque are silver or silver plated.  Is I said, I presume this was given to Biancone by OSU at the end of his senior season, either because he was a team Captain, MVP, or they could have given these to all the seniors.  A cool piece of 80+ year old Oregon State history!

In the last picture below from 1932, John Biancone (far right) is standing next to his coach at OSU, Paul Schissler (center), and teammate Harold Moe (far left).